We believe in God the Father, God the Son, and God the Holy Spirit – three distinct beings yet one God.

Then God said, Let Us make man in Our image, according to Our likeness. Gen. 1:26

We believe that God created all things and nothing came into existence apart from Him.

In the beginning, God created the heavens and the earth.  Gen. 1:1

We believe when God created all things, His creation was good.

And God saw all that He had made and behold it was very good. Gen. 1:31

We believe God’s beautiful creation sinned against Him.

You [Satan] were in Eden, the garden of God…You were the anointed cherub who covers…You were blameless in your ways from the day you were created until unrighteousness was found in you.  Ezek. 28:13-15

Therefore, just as through one man [Adam] sin entered into the world, and death through sin, and so death spread to all men, because all sinned.  Rom. 5:12

And, therefore, death entered into the world because of sin, which separates us from God.

For all have sinned and fall short of the glory of God. Rom. 3:23

For the wages of sin is death, but the free gift of God is eternal life in Christ Jesus our Lord. Rom. 6:23

We believe God bridged that separation by sending his only Son to take on flesh, become a man, and die for the sins of the world.

For God so loved the world, that he gave his only begotten Son, that whosoever believes in Him will not perish, but have eternal life.  John 3:16

We believe Jesus was born of a virgin and believe it’s an essential component of scripture.

Mary said to the angel, “How can this be, since I am a virgin?” And the angel answered and said to her, “The Holy Spirit will come upon you, and the power of the Most High will overshadow you; and for that reason the holy offspring shall be called the Son of God.”  Luke 1:34-35

We believe Jesus, the Son of God was sinless in nature and became sin on our behalf, so he might die in our place for the remission of sins.

The next day he [John the Baptist] saw Jesus coming to him, and said, “Behold, the Lamb of God who takes away the sin of the world!”  John 1:29

He made Him who knew no sin to be sin on our behalf that we might become the righteousness of God in Him.  2 Cor. 5:21

We believe in the death, burial and resurrection of Jesus Christ, as outlined in scripture.

We believe Jesus Christ is the only way to eternal life.

And, therefore, we believe salvation comes through faith in Jesus Christ, not by works.

And there is salvation in no one else; for there is no other name under heaven that has been given among men, by which we must be saved.  Acts 4:12

For by grace you have been saved through faith; and that not of yourselves, it is the gift of God; not a result of works, that no one should boast.  Eph. 2:8-9

Behold, I am coming quickly, and My reward is with Me, to render to every man according to what he has done.  Rev. 22:12

We believe all scripture is God-breathed and is the Word of God.  It is foundational to the way in which we live our lives.

But know this first of all, that no prophecy of Scripture is a matter of one’s own interpretation, for no prophecy was ever made by an act of human will, but men moved by the Holy Spirit spoke from God.  2 Pet. 1:20-21

All Scripture is inspired by God and profitable for teaching, for reproof, for correction, for training in righteousness; that the man of God may be adequate, equipped for every good work.  2 Tim. 3:16-17 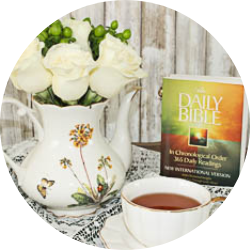 Are you looking to grow in your walk with the Lord? You've come to the right place. We've incorporated our love for God’s Word, designing beautiful tablescapes, preparing delicious food, and planning themed events to create uniquely themed bible studies and devotions. Our hope is, through these, you will build friendships, have fun, and be transformed by the Holy Spirit. Our desire is to encourage women to come to the table, sit with Jesus, and find nourishment and sustenance in His Word.
Read More 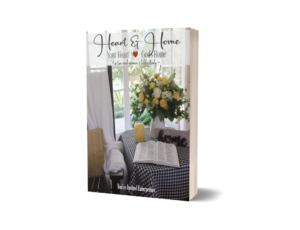